The Mythology of Wine – A First Sip

Now that I’m living in California wine country, farming my own grapevines, and making my own wine, I’ve taken a special interest in the mythology associated with vineyards, wine, and wine deities. It is fascinating material that deserves to become more widely known, so as this year’s harvest approaches I’ll be writing a few posts about it. In this first post I’ll cover some general concepts of the mythology of wine, and in subsequent posts I’ll dive more deeply and specifically into wine mythology in the ancient Near East (especially Israel in the Hebrew Bible and New Testament), Egypt, and in ancient Greece.

The Origins of Viniculture and its Effects on Wine Mythology

The first evidence of winemaking comes from the Caucasus, Zagros, and Taurus mountains in what is now parts of Georgia, Armenia, Northwestern Iran, and Southeastern Turkey around 7,000 BCE, and the vine was first domesticated by around 4,000 BCE (McGovern 2009, pp. 14-15; Heskett and Butler, pp. 8, 17, 19). From there it spread into Mesopotamia and western Anatolia, and then into Canaan, Egypt, Crete, Cyprus, and what is now Greece. Phoenician and Greek traders and colonists then brought it to the rest of the Mediterranean world and the Black Sea (OCW, pp. 526-30). In each location, wine deities took root, along with wine mythology. The domestication of grapevines led to cloning and hence vines that were genetically stable and which produced higher sugar, and therefore higher alcohol in the wine and the greater “magical” effect that led to myths (Heskett and Butler, pp. 7-8). Grapevines need a period of true dormancy to grow best, meaning that viniculture thrived best where there was a winter, as in the highlands of Canaan, Crete, Anatolia, and parts of what is now Greece and Macedonia. So naturally that’s where the most important wine mythology emerged.

It is important to understand that in the ancient world wine was not a luxury for wealthy people but a necessity and staple for the population at large. Bread and wine were the basic elements of food and drink. Ancient Romans, for example, drank about a liter of wine daily; similarly, in ancient Israel the prescribed wine offering to Yahweh was about a quart (Exodus 29:40 – ¼ of a hin). Wine had this key role for health reasons, because much water was not potable in hot climates, being full of microbes and other contaminants. But wine, due to its alcohol, had no such drawbacks. Mixing wine into water would reduce the health risks. For this reason, ancient armies protected themselves against disease and destruction by mixing wine with the unreliable water supplies that they came upon when campaigning. Wine also had medical (curative) applications. Thus, the author of 1 Timothy advised, “No longer drink only water, but take a little wine for the sake of your stomach and your frequent ailments” (5:23).

Because wine was such a necessity for everyone, it naturally had a large impact on the culture, including its religion and mythology, and which gave rise to metaphorical and symbolic uses. Vineyards and wine marked higher civilization and cultural achievement. The abundance of vineyards and wine was a mark of prosperity, which was attributed to divine blessing and favor. In America, when all people are prosperous we say there is a “chicken in every pot,” but in ancient Israel the equivalent was each person being “under his vine and fig tree” (1 Kings 4:25; Micah 4:4; Zechariah 3:10).

Why Wine Became Mythological and Important in Religious Rituals

The discovery of wine was accidental. Fermentation happens naturally and spontaneously without human effort because the yeasts that ferment the sugar are present on the skin of the grape. So wine is most easily made by crushing the grapes so the yeast could mix with the sweet juice.

For many centuries, however, people didn’t understand this process. People were unaware of yeasts and did not know how fermentation worked. They knew only that this seemingly magical process worked best with grapes, although wine could be made also from other fruit such as dates, while beer could be made from cereals. Grapes work best (produce higher alcohol) because they are sweeter than other fruits and grains, but ancient people didn’t understand the why of this either. 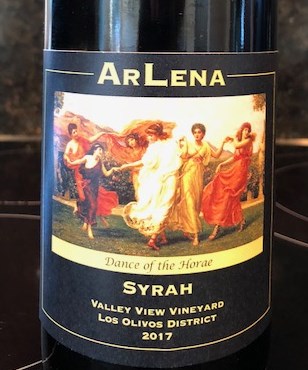 I’ve named the 2017 vintage of my own wine after a mythical theme, the Greek Horae, agricultural goddesses who were said to dance their way through the seasons. Hence the provisional title of my next book, about the mythology underlying our seasonal holidays, is The Dance of the Horae. I’ve named my backyard vineyard, from which I’ll start making wine next year, Mythic Vineyard.

As a result, ancient peoples thought this spontaneous process was magical in nature, and that divine forces or beings were responsible for it. People took note of two separate transformations, both of which were considered divine, and spawned wine symbolism and mythology. The first was the transformation of grape juice into wine, and the second was the alteration in our consciousness when we drink it (BoS, p. 174). Grapevines and grapes were held to have a divine quality and a divine force within them, and therefore a wine deity had to be behind it all. Consequently, the change in consciousness that occurred when people drank wine also was thought to be an irruption of the divine. When people, in a departure from their routine existence, were under wine’s effect, they were experiencing union with the divine and the wine deity. Wine itself came to symbolize the presence of a pneuma; a spirit or god dwelt within it (Jung, CW 14: 387). Naturally, in some ancient cultures wine was thought to be the drink of the gods, and so people offered it to them.

The divine force in wine was thought to have many aspects. First and foremost, it epitomized the life force. (The fact that the best wine comes from grapes grown in difficult soils makes this association stronger.) As such, wine became associated with the renewal of life, rebirth, resurrection, the afterlife, and immortality. To the ancients, this seemed to be evidenced by the red juice of grapes, which became associated with blood, the blood of life. This helps explain why wine was offered in sacrifices alongside the slaughter of animals, and in some cases wine offerings eventually replaced animal sacrifices (Biedermann, p. 383). This likewise explains why wine was associated with Christ and Dionysus, as I will detail in future posts.

The consciousness associated with wine was thought to be of a higher kind. While bread symbolized the physical side of subsistence, wine symbolized the spiritual. (We still call alcoholic beverages “spirits.”) Wine was spiritual in nature in the fullest sense of the word, and was associated with higher knowledge (Jung CW 11:383-84). As a result, wine came to symbolize also the psychological conditions of its production, the human virtues which make civilization possible (Jung CW 11:384). Thus, in ancient Greece the epitome of civilized philosophical discussion was the symposium, where drinking wine was de rigueur.

While wine represented the advancement of civilization, ancient writers rightly warned against drunkenness and excess, as in the biblical story of Noah’s drunkenness (Genesis 9:20-25). Drinking wine carried with it a responsibility, which if mishandled is considered barbaric (Heskett and Butler, pp. 9-10). Wine thus served as a test of the ancient Greek ideal of moderation. This was illustrated in the myth of the Lapiths and the Centaurs. In the story, Pirithous, King of the Lapiths (a legendary people of Thessaly), invited neighboring Centaurs (who generally represented primitive, barbaric life) to his wedding. The Lapiths were moderate and civilized, but the Centaurs (who being uncivilized were not used to wine) got drunk and out of control and attempted to rape the bride and other guests, both male and female. This resulted in a battle known as the Centauromachy in which the Lapiths defeated the Centaurs and sent them back into the wilderness, thus reaffirming the boundary between civilized life and barbarism. 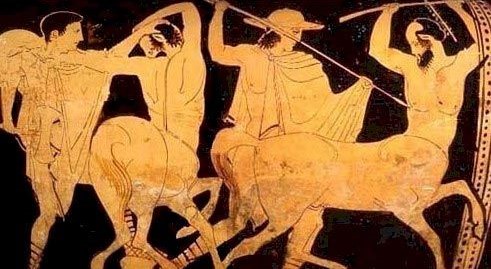 Depiction of the battle between the Lapiths and Centaurs, in which the Lapiths wielded metal spears and the Centaurs sticks and stones, highlighting the contrast between civilized life and barbarism. Appropriately, the depiction is on a krater, the Greek vessel used to water down wine, thus reminding people of the need for moderation. Attica, 450-30 BCE, now at the Louvre.

Against the above background, in my next post I’ll cover wine mythology in the Ancient Near East.

–––––. Uncorking the Past: The Quest for Wine, Beer, and other Alcoholic Beverages. Berkeley: University of California Press (2009).

4 Responses to The Mythology of Wine – A First Sip

Wine consultant & writer, one of only four people in the world to hold both Master Sommelier and Master of Wine titles