This post in my series on the mythology of wine covers the symbolism of wine, grapevines, and vineyards in relation to Christ.

Israel and Jesus as Grapevines

In an earlier post, I mentioned that in the Hebrew Bible Israel is often portrayed as a vineyard, with Yahweh being the vintner (e.g., Ps 80:14-15; Is 5:1-7). If the Israelites failed to obey the Law, the vineyard would degenerate and yield poor grapes (e.g., Jer 2:21; also Is 5:2). Prophets blamed Israel’s and Judah’s domination by Assyria and then Babylon to the people’s failure to obey the Law. When Judah fell to the Babylonians, the Jewish elite was exiled, the last Davidic king was dethroned and died in exile, and Judah ceased to exist. The “vineyard” was no more. After the exile, Jews lived in their former territory, now named the Persian (and subsequently Hellenistic Seleucid and then Roman) province of Judea.

As a result of such foreign domination and feelings of guilt, the Jews developed the notion of a future David who would save them from their plight, judge the wicked, and establish an ideal Jewish kingdom. Thus, Yahweh told the prophet Jeremiah that “I will cause a righteous branch of David to spring up, and he shall execute justice and righteousness in the land. In those days Judah will be saved . . . .” (Jer 33:15-16). As messianic and apocalyptic expectations grew, the grapevine was viewed as the tree of the coming Messiah (e.g., 2 Baruch 39:7), and the vineyard symbolized the utopia to be established after judgment day. Spears would be turned into pruning hooks, and swords into plowshares; rather than make war, people would lounge under their grapevines and fig trees (Mic 4:3-4; Sir 3:10).

Jesus himself utilized this image of Israel as a vineyard in his Parable of the Tenants contained in all three Synoptic Gospels as well as the Gospel of Thomas. There a landowner planted a vineyard, leased it to tenants, and left the country. At harvest time, he twice sent representatives to collect the produce, but the tenants killed them. Finally he sent his son on his behalf, thinking that surely the tenants would respect him, but they killed him too. Jesus teaches that the owner will put the tenants to death and lease the vineyard to new tenants who will render to him the produce. In the parable, the original tenants were likened to the priests and Pharisees (Mt 21:45), and the murdered son was Jesus. He was foreseeing his own persecution and execution at their insistence (see Mt 21:33-46; Mk 12:1-12; Lk 20:9-19; Th 65:1-8, 66). (As the account was being told in the late in the 1st century and mainly outside Palestine, the new tenants were seen as the Gentiles.)

The above provides the background to why Jesus described himself as “the true vine” and his disciples as its branches (Jn 15:1-15). In the Gospel of John Jesus said, “Just as the branch cannot bear fruit unless it abides in the vine, neither can you unless you abide in me” (15:4). Those who abide in Jesus will abide in his and the Father’s love, and like the vine bear much fruit; those who do not will wither, do nothing, and vanish. Here the old notion of Israel as the vine and vineyard is now being applied to Jesus himself. This implies that being in the right relationship with God and achieving salvation is not a matter of being a member of ethnic Israel but rather requires being grafted to Christ. This means that the Christ movement and salvation are open to Gentiles; for John being a true Jew and a Christian are one and the same thing (Keener, pp. 991 & n. 37 with citations, 993). Later when Christianity developed, the Church, which provided the connection to Christ, portrayed itself as the vine, which was thought of as bearing much fruit (Ferguson, p. 40).

A prophecy of Isaiah said that a savior (described as a shoot or branch) would sprout out of the stump of Jesse (King David’s father), render judgment, and stand in glory before all peoples (11:1-10). Early Christians seized upon this passage as predicting the coming of Christ (e.g., Rom 15:12). This explains why later Matthew and Luke felt a need to provide a genealogy (family tree) of Jesus tracing him back to David and Jesse, and in Luke’s was all the way back to Adam (Mt 1:1-17; Lk 3:23-32). Was what became known as the “tree of Jesse” thought of as a grapevine? While Isaiah 11.1 uses Hebrew vocabulary which could (but not necessarily) apply to a grapevine, the passage needs to be read in the context of the preceding Chapter 10, which talks only of the felling of trees in the forests as part of the punishment of Israel (10:19, 33-34). Since Isaiah 11:1 is based on the result of the destruction described in Chapter 10, it probably does not primarily refer to grapevines as opposed to trees, although grapevines too would have been swept up in the general destruction. The vineyard metaphor (or even that of bearing fruit) is not being used here. Once we move into the period of messianism and apocalyptic literature, and eventually with Jesus as Messiah, however, the situation is different. Since the vine is viewed as the tree of the Messiah, and since Jesus the Messiah is the vine and the fruit of the tree of Jesse, it becomes clear that the grapevine is involved.

In the Gospel of John the first miracle of Jesus was when he turned water into wine at the wedding in Cana (Jn. 2:1-11), which “revealed his glory; and his disciples believed in him” (2:11). But there is more to this than just proof of his identity and miraculous powers. Jesus’s wine itself made a favorable impression, for the steward (who was unaware that the wine had run out) remarked to the bridegroom, “Every man first serves the good wine, and when they [the guests] have become intoxicated the lesser wine; but you kept the good wine until now” (2:10). In Israel, as elsewhere to this day, old wine was considered superior to new wine, but now Jesus’s brand new wine was deemed superior. Jesus’s superiority as a vigneron symbolized the superiority of Jesus himself and his new message compared to the doctrines of the priests and Pharisees. Indeed, much as Jesus made that wine in water jars (ὑδρίαι) rather than wine amphorae, he also told his disciples, “No one puts new wine into old wineskins; … new wine is put into new wineskins” (Mk 2:22; also Mt 9:17; Lk 5:37-38). Here his new and better wine was a metaphor for his novel and superior teaching (new covenant), which he contrasted with the empty doctrines and practices of the Pharisees and the priesthood. Using new wineskins for new wine (which has not entirely finished fermenting) allows the wineskin to expand (whereas old ones would split), so the point here is that Jesus’s new teachings should expand among the people (see Nolland, p. 249). In a similar vein, in the story of the Samaritan woman at the well told in John 4:7-26, Jesus offers novel “living water” of salvation and eternal life, as opposed to the traditional water that the woman had been drinking, again a reference to his new and superior teachings.

Wine in the Last Supper, the Crucifixion, and the Eucharist

In the Gospel of John, Jesus teaches the disciples that “unless you eat the flesh of the Son of Man [Jesus] and drink his blood, you have no life in you. Those who eat my flesh and drink my blood have eternal life, and I will raise them up on the last day; for my flesh is true food and my blood is true drink. Those who eat my flesh and drink in my blood abide in me, and I in them” (6:53-56). In John this is not actually acted out at their last meal together , but in the Synoptic Gospels the Last Supper features wine as Christ’s blood and bread as his body. In Mark, at the supper Jesus says, holding the cup of wine, “This is my blood of the covenant, which is poured out for many. Truly I tell you, I will never again drink of the fruit of the vine until that day when I drink it new in the kingdom of God” (Mk 14:24-25; likewise Mt 26:28-29; Lk 22:18-20). Two points are important here. First, by saying that the wine is his blood, he is alluding to the traditional Israelite blood sacrifice described in Exodus 24:4-8, and so portraying his own imminent execution as a sacrifice, thus paving the road (anachronistically) to the doctrine of original sin. (The comparison of wine with blood derives from Genesis 49:11 and Deuteronomy 32:14 describing wine as the blood of grapes.) Second, here again we see the above-mentioned association of vines and wine with the utopian kingdom of God. Wine was to be a beverage in that kingdom. And Jesus was true to his word: When he was offered wine mixed with myrrh/gall while on the cross, he refused it (Mk 15:23; Mt. 27:34). In the famous Antioch Chalice (or lamp) from the 6th century CE, Christ is depicted as seated among grapevines, probably enthroned in the kingdom of God, himself perhaps the vine or its fruit (see illustration).

At the crucifixion, Jesus was thought of not only as a sacrificial lamb, but also as a grape that was crushed, his blood being equated with wine. Accordingly, in Christian art the cross was sometimes portrayed as a grapevine. The idea here, again harking back to Isaiah 11:1, was that the dead tree of Israel (possibly too the Tree of Life, access to which (and hence the possibility of everlasting life) had been cut off by the transgression of Adam and Eve) has become green and is bearing fruit again because Christ has been grafted upon it and has revived it with his blood (see Ferguson, p. 39 and illustration below). In Baroque allegories the Lamb of God is often placed between thorns (representing crucifixion) and bunches of grapes. 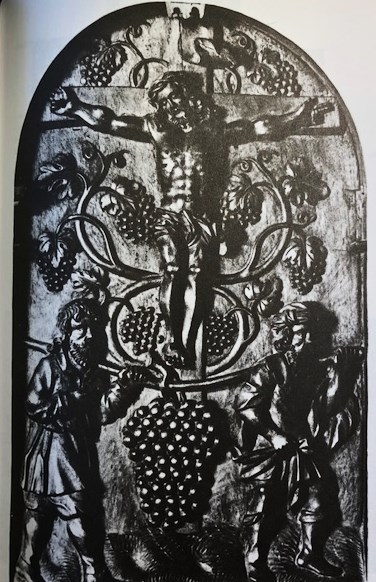 Christ on a grapevine cross, perhaps as a cluster of grapes. At the bottom are the spies of Moses returning from Canaan with the huge cluster of grapes (Num 13:23). Christians claimed that the cluster on the pole prefigured Christ’s crucifixion on a pole (rose), which naturally led to conceiving of Christ as a grape cluster being crushed. From the church door at the Castle of Velere, Sion, Switzerland, 13th century CE.

Early Christianity developed the sacrament of the Eucharist, with the ritual modeled on the Last Supper. The notion that the wine is literally Christ’s blood is ultimately derived from the tradition, described in an earlier post, that wine is a vital substance with divine properties and can connect a person with the divine. This sacrament also reflects traditional rituals found in many religions of consuming food symbolizing the body of a divinity in order to appropriate or at least temporarily experience his or her divine powers. And finally, in myths and rituals wine was often equated with blood.

Postscript: I’ve just published an entire book, The Mythology of Wine.  It traces wine mythology through ancient Mesopotamia, Anatolia, Egypt, Canaan/Israel, Greece, and in Early Christianity.  It is not that long, contains lots of fun facts and illustrations, and is not expensive.

Wine consultant & writer, one of only four people in the world to hold both Master Sommelier and Master of Wine titles